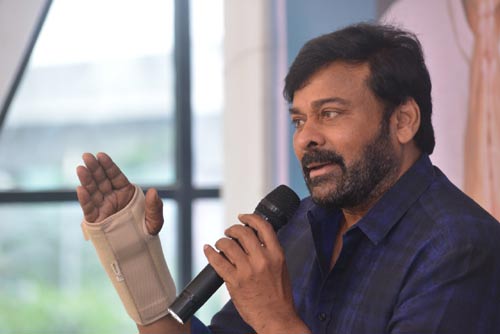 Megastar Chiranjeevi recently underwent a minor surgery on the median nerve of his right hand wrist. Chiru was spotted wearing a supportive gear on his right hand at a special meeting with his fans at Chiranjeevi Blood Bank on Sunday afternoon.

Chiranjeevi told his worried fans that he has been experiencing severe pain and numbness on his right hand for quite some time. Apparently, Chiru’s doctor at Apollo Hospitals, Dr. Sudhakar Reddy (son-in-law of veteran director Vijayabapineedu), had informed him that the median nerve of his right hand wrist was causing the pain due to the Carpal Tunnel Syndrome and suggested a minor surgery.

Chiru further revealed that the surgery lasted for 45 minutes under Dr. Sudhakar Reddy’s supervision, and that the doctors had operated on the tissues around the median nerve to reduce the pain. Megastar also told his fans that he is taking a break from Godfather’s shoot for 15 days and that he will resume the shoot from November 1st.