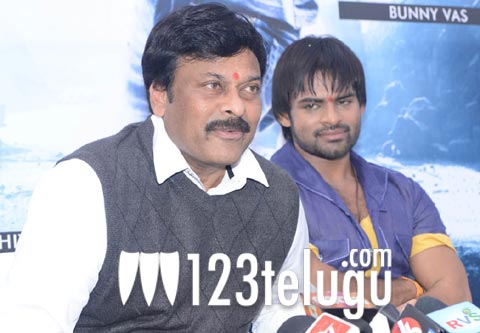 The trend of remixing popular songs from Chiranjeevi’s career seems to be at an all time high these days. In the past, two of his songs – Bangaru Kodipetta and Vana Vana Velluvaye were remixed in Ram Charan starrer Magadheera and Racha respectively. And recently, ‘Shubhalekha Rasukunna’ was remixed for Ram Charan’s next film Naayak. Now, it’s the turn of another hit track – ‘Golimar’ from Chiranjeevi, Radha starrer Donga to be remixed. The song has been remixed for Chiranjeevi’s nephew Sai Dharam Tej’s debut film Rey. Saiyami Kher and Shraddha Das are playing the lead roles opposite Sai Dharam Tej in this romantic entertainer. The remix of Golimar is currently being shot on Sai Dharam Tej and Shraddha Das in Hyderabad. Raju Sundaram is the choreographer for this song. YVS Chowdhary is directing and producing the film. Except for few songs and some patch work, most of the film’s shooting has been wrapped up. Rey is likely to hit the screens in early 2013.