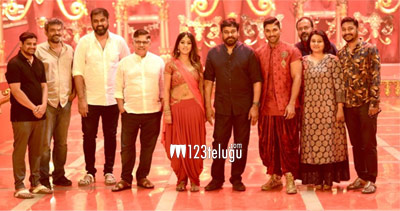 Earlier today, we had revealed that the shooting of Na Peru Surya’s song is being shot in the Annapurna Studios in Hyderabad. The entire unit was quite surprised to see none other than megastar Chiranjeevi dropping on the sets.

The megastar not only spoke at length with Bunny but also watched him perform the song. Allu Aravind also accompanied Chiranjeevi and wished the team all the best.

Anu Emanuel is paired opposite Bunny in this film whose pre-release event will be held on a grand note this month end. Vakkantam Vamsi directs this film which will be released on the 4th of May.