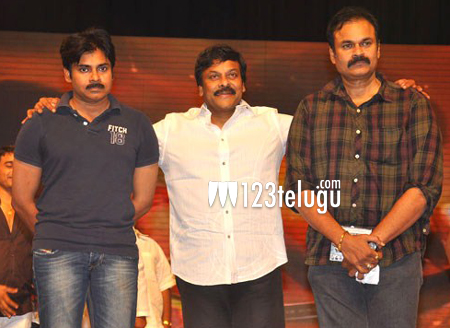 If the ongoing buzz is to be believed, Megastar Chiranjeevi and his brother Pawan Kalyan will soon come together on the same dais in a joint press meet. Reports suggest that Naga Babu himself will be bringing the two Mega brothers on the stage. It is being reported that Naga Babu mentioned these words during the All India Mega Fans Meeting in Hyderabad yesterday.

For the last couple of years, numerous reports have been published stating the differences between Chiranjeevi and Pawan Kalyan. Adding fuel to the fire, Pawan’s absence in many of the Mega family events gave more mileage to the reports about the dispute within the Mega family.

If the press meet news is indeed true, it will definitely be a huge relief to all the Mega fans and there is no doubt that it will be a fitting retort to the media which has been constantly after the Mega brothers.