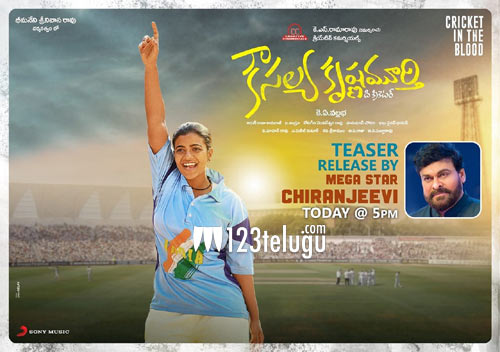 Star heroes often promote small and low budget films to help them gain good buzz among the audience and trade circles. Megastar Chiranjeevi is one man, who will always be the front runner in giving a lift to the small films.

Now, the news is that Chiru will be unveiling the first look teaser of the low-budget film, Kousalya Krishnamurthy today evening at 5 PM. Set in women cricket backdrop, the film has Aishwarya Rajesh and Rajendra Prasad in the key roles.

Bheemaneni Srinivasa Rao has directed this film which is a remake of Tamil film, Kanna. K.A.Vallabha bankrolled it under Creative Commercials banner.