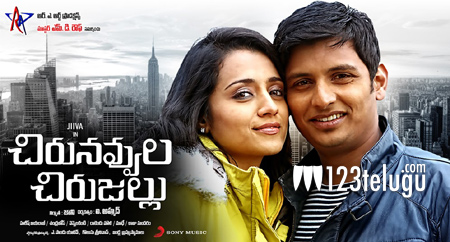 Chirunavvula Chirujallu is the dubbed version of ‘Endrendrum Punnagai’ which was a huge hit in Tamil. The movie has finished its censor formalities and is accredited with a U/A certification. Arrangements are being made to release the movie on the 21st of this month.

Chirunavvula Chirujallu has Jiva of Rangam fame paired opposite Trisha and Andreah. Other notable actors in the film include Nassar, Santhanam and Vinay. Harris Jayaraj has composed the music for this film. I.Ahmed is the director and Johny is producing the movie under R.A.Art Productions banner.