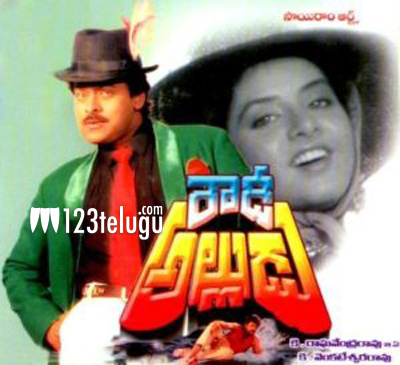 Rowdy Alludu was one film which broke many records in Chiranjeevi’s career. The film which released in 1991 has now completed 25 years today. Chiru was at his peaks in his career and did a double role in the film which went to become a huge hit.

Right from the taking to the comedy, this film had it all. Divya Bharathi was the star attraction in the film along with Chiranjeevi’s full on mass avatar as Auto Jani. The mega star mesmerized the audience by playing two different roles in the film with a lot of ease.

Bappi Lahari’s hit music, Kota Srinivasa Rao and Allu Ramalingaih’s comedy were one of the major reasons for the film’s success. The icing on the cake was K Raghavendra Rao’s direction as he gave mega fans a huge feast by his top notch commercial direction.

The film was a runaway hit in Chiranjeevi’s career and took him to new heights of stardom. We congratulate the entire team as the film completes its silver jubilee year today.