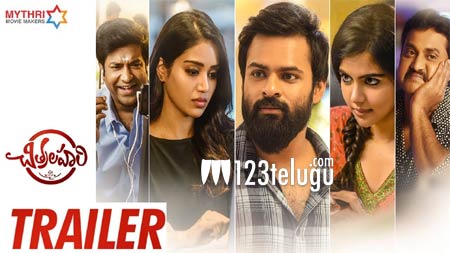 The theatrical trailer for Sai Dharam Tej, Nivetha Pethuraj and Kalyani Priyadarshan’s soon-to-release romantic drama, Chitralahari, is out this morning. The trailer introduces Sai’s character as Vijay, who never sees success in his life.

Chitralahari’s trailer is both fun and emotional at the same time, as it showcases Sai’s character as an eternal loser who awaits success in his career. There is also an intriguing love triangle between him, Nivetha and Kalyani. Sunil adds humor to this otherwise emotional tale.

Director Kishore Tirumala comes up with some wise oneliners and an engaging storyline. DSP is the film’s music composer. Mythri Movie Makers banner has produced the film, which will hit screens on April 12.