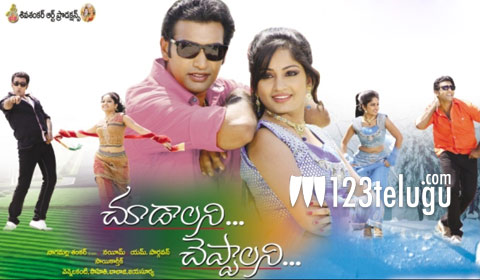 Chudalani Cheppalani is a love themed entertainer starring NT Rathna and Madhavilatha. This film is directed by young director Pargavan and produced by Nagamalla Shankar under Sri Siva Shankar Art Productions banner. The DTS work of the movie is completed and it is all set to be released. Producer Nagamalla Shankar addressed the media and said that the film is complete for most parts and the first copy of CC will be ready very soon. He further said that the film will be sent to Censor Board in a week and that it was planned to release the film in this month itself.
The producer appreciated the dedication and cooperation extended by the lead pair of CC, Rathna and Madhavilatha. He went on to say that director Parganvan’s commitment had helped them complete the shooting and other technicalities in time. The concept of CC is unique and Pargavan has proven his mettle with this film, given the way he has treated the subject, making it appealing to every category of audience. After watching CC, the audience will acknowledge this.
Even the film’s music that was released through ‘Legend Music’ has garnered positive reviews. Sai Karthik has given great music to the songs penned by Vennelakanti, Sahiti, Balaji and Jayasurya and the audio is already gaining popularity. All the songs were shot in scenic locations. Nagamalla Shankar signed off with a promise to announce the release date as soon as all the formalities were over.
The star cast of CC includes Tarakaratna, Madhavi Latha, M Balayya, Kasi Viswanath, Anita Nath, Vijay, Ambati Srinu, Phani, Bhupati, Giri, Dr Krishna Rao, Krishnateja and others. Music was composed by Sai Karthik, lyrics by Vennelakanti, Sahiti, Balaji and Jayasurya and editing was done by Nandamuri Hari. While Amar was behind the camera, Venkateswarulu handled art, Rajadorai provided the story, the dialogues were written by Vennelakanti. Production controller – Mallik, line producer – Nayeem, Vaddi Narsimha Rao and Raftunisha Sheikh – co-producers, Nagamalla Shankar – Producer, Pargavan – Screenplay and direction.