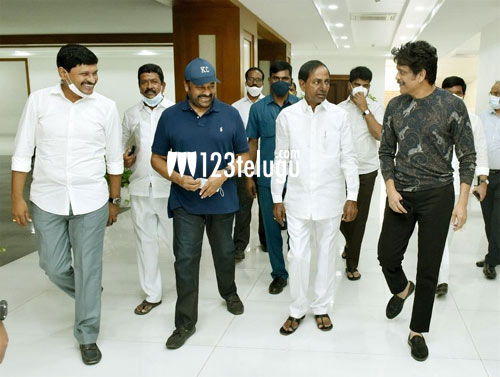 Tollywood stars Chiranjeevi and Nagarjuna today met with Telangana Chief Minister KCR at his camp office in Pragati Bhavan. Both the actors handed over the cheques for Rs 1 crore and Rs 50 lakhs respectively to the CM towards flood relief.

During the meeting, KCR discussed setting up a world-class film city on the outskirts of Hyderabad. KCR said that his government will allot 1,500 to 2,000 acres of land for the project. Once materialized, the project is expected to generate employment to thousands of people.

The CM advised film industry representatives and government officials to visit the Cinema City in Bulgaria and study the possibilities of setting up a large-scale film city. KCR further said that the government will facilitate an airstrip and other necessary infrastructure to build advanced film studios and shooting floors in the Cinema City of Hyderabad.