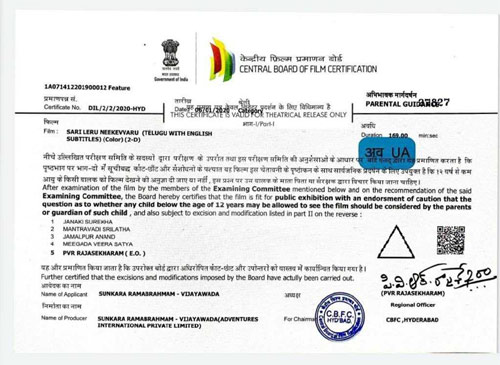 Mahesh Babu’s highly-anticipated Sankranthi family entertainer, Sarileru Neekevvaru, completed its censor formalities a few days ago and is gearing up for a humongous worldwide release on January 11. The film’s theatrical trailer, which was released yesterday at the pre-release event, has become a rage on social media and has been trending at number 1 place on YouTube.

Ever since Sarileru Neekevvaru cleared the censor scrutiny and received a UA certificate from the CBFC, there have been several gossips that the film’s runtime will be about 129 minutes or 136 minutes, making it one of the shortest movies in Mahesh’s career. However, the latest confirmed update is that the film has a runtime of 149 movies. It’s safe to say that it’s the perfect runtime for a Sankranthi entertainer.