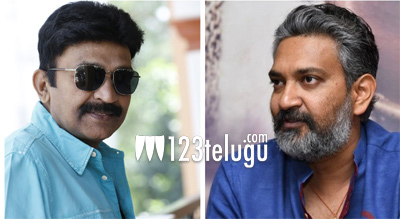 Even as numero uno director Rajamouli is still busy penning the script for his much-talked-about multi-starrer with NTR and Ram Charan, speculations have been rife ever since the film’s announcement. Recently, there were rumours that hero Rajasekhar, who has made a solid comeback with Garuda Vega, will be essaying the main antagonist’s role in Rajamouli’s multi-starrer.

However, Rajasekhar’s wife and senior actress Jeevitha gave the much needed clarity in a recent interview with a leading English daily. “We actually met Rajamouli garu to invite him as the chief guest for our daughter’s debut film launch. Maybe people are assuming that Rajasekhar is doing Rajamouli’s film after seeing both of them at the same place,” said Jeevitha. She went on to add that Rajamouli has not approached Rajasekhar for his multi-starrer.

Meanwhile, Rajamouli will resume scripting for the movie once he returns from Karachi. The multi-starrer will kick-start from September. DVV Danayya is bankrolling this humongous project.