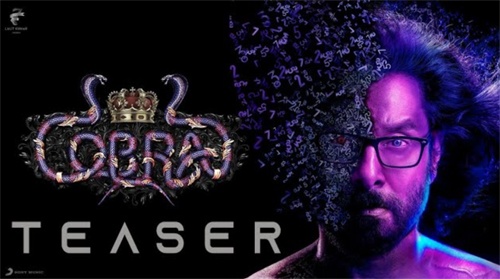 The much-awaited teaser for Chiyaan Vikram’s Cobra has been released this morning. Vikram plays a mathematics genius who teaches maths to underprivileged children. But the twist in the tale is that Vikram also plays a most wanted international fugitive who pulls off notorious crimes using mathematical formulas.

Cobra is set against the backdrop of Russian mafia. Vikram dons several looks in the teaser and raises expectations. While former Indian cricketer Irfan Pathan surprises in a negative role, KGF game Srinidhi Shetty plays the female lead in the movie.

Demonte Colony fame Ajay Gnanamuthu is the producer. Lalit Kumar is bankrolling the film and AR Rahman is composing the music.