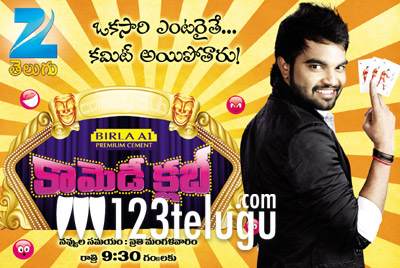 Laughter is the best medicine, this phrase holds great truth. Looking at how stressful our lives have become, there are times when we need to forget all our sorrows and just have a nice laugh. In AP making people laugh is considered fortunate while being able to laugh is considered as a blessing.

Keeping this above thought in mind Zee Telugu brings laughter into the viewer’s lives with an out and out comedy show “Comedy Club”, your weekly dose of hilarious comedy. For the first time on Telugu Television a multi talented comedy show is being introduced with standup comedy, skits, comedy acts & much more.

This show promises to be a laugh riot and hopes to be one of its kinds on Telugu TV. Comedy Club will have 6-8 participants selected from across AP, coming on to the stage to perform in front of studio audience. The acts will be in the form of skits, solo acts, mimicry and special comic acts.

As the caption suggests ‘Sarikotta Velugu’, a Telugu phrase that conveys the meaning ‘New Light’. Zee Telugu has always stood by it. Zee Telugu, the channel created with a vision to provide wholesome entertainment to the entire family, has become a very popular channel amongst all age groups today. Besides strong fiction content, the programs range from devotional, music, dance, comedy, to blockbuster movies and reality shows.

Zee Telugu is the first southern regional channel from Zee bouquet. In just few years of its inception it soared high on popularity charts by breaking the barriers of a stereo typical Fiction Television. It gave a new path with its creative ideas, constant innovation and a feel for popular taste thereby bringing radical changes in viewership patterns. Being a strong contender for No.2 in Telugu GEC, Zee is striving to consolidate its position. There are over 15 million patrons to Zee Telugu across the Globe.