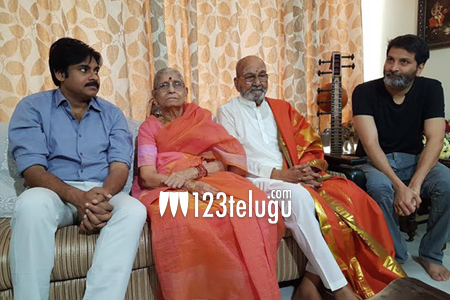 Fans, well-wishers and several celebrities continue to drench the legendary director Kalatapasvi K Viswanath on being honored with the country’s highest cinematic achievement, the Dadasaheb Phalke award, for the year 2016.

Last night, Super Star Rajinikanth took his Twitter and congratulated the veteran auteur on Phalke award. This morning, Power Star Pawan Kalyan and Trivikram visited K Viswanath’s residence and spent some quality time with the legend after extending their wishes.

On this occasion, Pawan revealed that Subhalekha, Sankarabharanam and Swayamkrushi as some of his favorite K Viswanath movies.