Bollywood actress Kangana Ranaut has made comments on South Indian actors and their movies. The Queen actress took to Instagram last night and made her point why South actors and their content are such a rage.

The controversial actress took to her Instagram and posted a Story about South Indian actors. She said that they are deeply rooted in Indian culture. They love their families and relationships are conventional not westernised, said the actress.

She also talked about their professionalism and passion is unparalleled. In the meantime, the actress takes a dig at Bollywood by saying, they ( South Indian actors) should not allow Bollywood to corrupt them.

Surprisingly, Kangana adds Oo Antava song from Pushpa to her story. Her sensational comments now making waves on the internet. 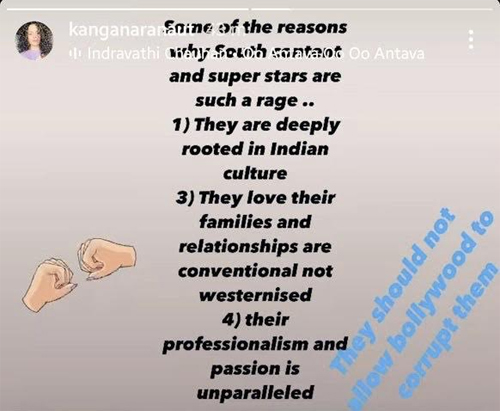