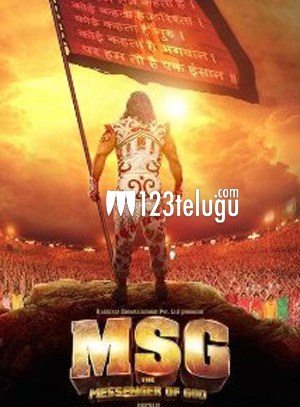 The much talked about controversial film, MSG: The Messenger of God, is finally hitting the screens across the world today. Featuring the leader of Dera Sacha Sauda spiritual organization, Gurmeet Ram Rahim Singh in the main lead, the film instigated a chain of controversies ever since its trailer was published on YouTube early this year.
Clearing all the hurdles, the film is now releasing in Telugu, Tamil and Malayalam languages, apart from Hindi.

MSG was in news for all sorts of reasons starting from the Censor Panel’s decision to deny clearance for the film. The film even led to the CBFC Chief Leela Samson’s resignation, citing

interference from political and fundamental organizations. Several Sikh religious groups have been openly opposing the film and even demanded a ban on its release.