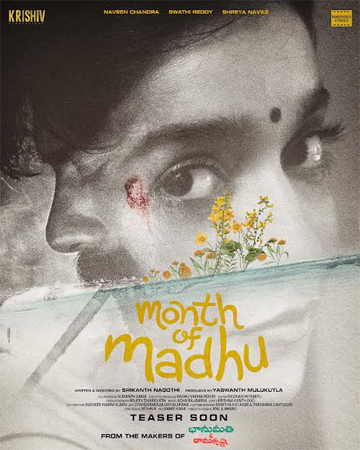 Young actor Naveen Chandra was last seen in Rana’s Virata Parvam. Now, he is coming to entertain audiences with his new movie as a lead actor. He has joined hands with the director Srikanth Nagothi for the film.

To recall, the duo worked for Bhanumathi Ramakrishna (2020), released on Aha directly. Now, they teamed up for another movie called Month of Madhu. The makers have also released a first look poster to announce the film and its title.

The film has ‘Colours’ Swathi as the female lead. Shreya Navile, Harsha Chemudu and others are also a part of the film. Achu Rajamani is the music composer for the film, which is produced by Yaswanth Mulukutla. The teaser and the release date will be revealed soon.