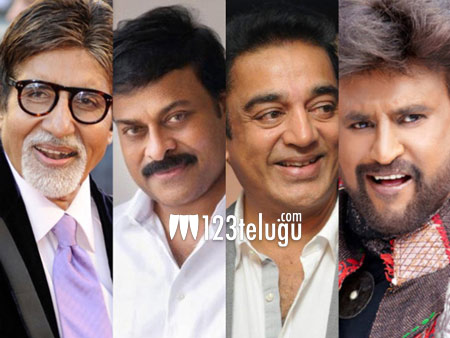 Fans of the four legendary stars, Chiranjeevi, Rajinikanth, Kamal Haasan and Amitabh Bachchan, are in for a memorable treat as all these stats will be sharing the same dais at the inaugural ceremony of Nadigar Sangam star cricket series to be organised by the South Indian Film Artistes’ Association in Chennai on April 17.

While Kamal and Rajini have confirmed their participation already, invitations have been sent to Chiranjeevi and Amitabh Bachchan and the organizers are hoping that both the Megastars will attend the inaugural ceremony. 8 teams comprising of 48 Tamil film stars will be taking part in this knockout tournament.

The satellite rights of this tournament have been sold for a staggering 9 crores and the rest of the proceeds will be used for the construction of Nadigar Sangam’s proposed new building.