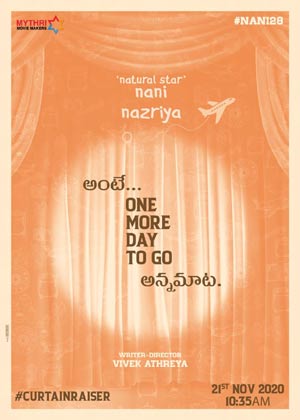 Hero Nani and acclaimed Malayalam actress Nazriya will sharing screen space under young filmmaker Vivek Athreya’s direction. The film marks Nazriya’s debut in Tollywood. Already, the makers had announced that the film’s title will be revealed on November 21.

According to the latest update from team, the film’s title and curtain raiser will be unveiled tomorrow (Nov 21) at 10:35 am. The film is touted as a romantic entertainer with a unique concept. Leading production house Mythri Movie Makers is bankrolling this project.