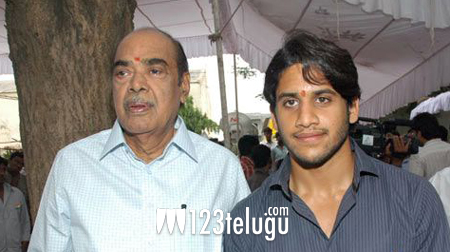 Movie mogul Dr D Ramanaidu might produce a film with Naga Chaitanya in lead role, if all goes well. Speaking to a leading newspaper, Ramanaidu revealed that he’s going to remake a Punjabi film Singh Vs Kaur, which he had produced, with Naga Chaitanya. Initially, he was keen on having his Rana Daggubati onboard, but he’s busy these days to play the lead role in the Telugu remake of Singh Vs Kaur. Apparently, Naga Chaitanya has already seen the Punjabi film and he is willing to do the film. Ramanaidu is planning to start the film’s production later this year and the search is on for a team to make the film. Currently, Naga Chaitanya is acting in Vikram Kumar’s Manam and after that he’ll join the sets of Hello Brother’s remake which will be directed by Srinivas Reddy.