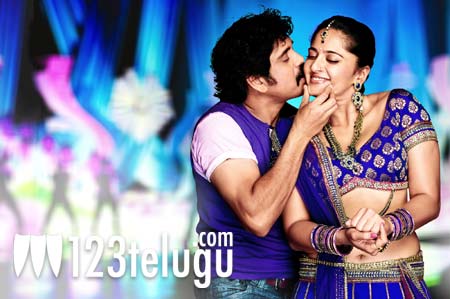 In a quite interesting move, ‘King’ Akkineni Nagarjuna’s ‘Damarukam’ is reportedly heading for censor certification tomorrow afternoon and the makers are insisting that they will release the movie on October 19th. The movie’s release has been a subject of intense debate, with some reports suggesting that R.R.Movie Makers will be releasing the movie on their own after some distributors expressed reluctance to release the movie on the 19th.

We have also heard reports that a few CGI shots have been left out to meet the deadline. ‘Damarukam’ is Nagarjuna’s most expensive ever and with a good amount of CGI shots and special effects, the movie is expected to generate a good buzz. Anushka is the heroine in the film and Srinivasa Reddy is the director.

The censor certification will begin tomorrow afternoon and will be completed by evening. We will keep you updated about the details as and when we get them.