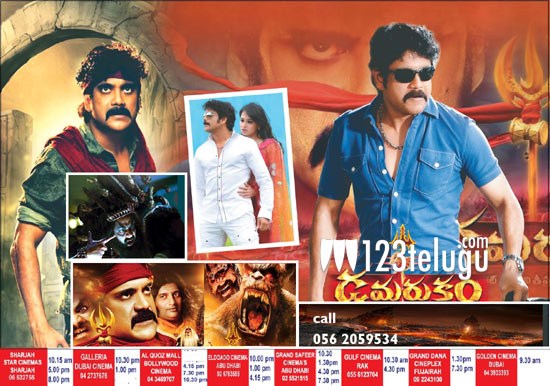 ‘King’ Akkineni Nagarjuna has interacted with the media today at a special press meet held in Annapurna Studios. He announced ‘Dhamarukam’s release date as November 23rd and expressed his happiness at how things were moving along. Nagarjuna also said that the issues surrounding ‘Dhamarukam’ have taught him patience and restraint.

“Dhamarukam faced many issues till now and all I can say is, these things have taught me patience and restraint. I am also very grateful to Dasari Narayana Rao garu, Alankar Prasad garu, my fans and other well wishers for their support. The movie is going to release on 23rd and I have full confidence in the project.”, said Nagarjuna.

He also expressed his thanks to producer R.R.Venkat for the big budget production. “Such hiccups in business are common and I know how hard Venkat is trying to release the film. A producer needs guts to attempt such a film and I thank Venkat for that.”, he said. The movie has been directed by Srinivasa Reddy.