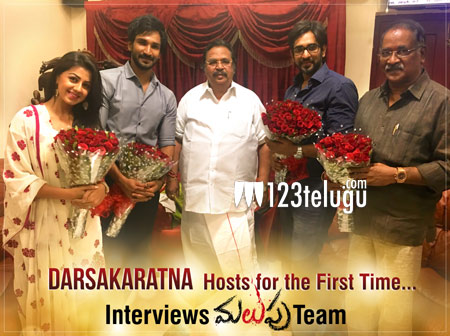 The Aadhi starrer “Malupu” emerged as a winner at the box office with rise in collections and theatres across Andhra Pradesh and Telangana states. Now, the team added a new feather to their success cap. The Telugu titan and legendary director Dasari Narayana Rao called upon the team of “Malupu” and appreciated their work.

Not just that, the film maker also hosted a special show all by himself for the entire team and discussed the making of the “Malupu”, which will be out soon. The super hit team of “Malupu” was humbled by his gesture and with all the appreciation received.

The makers are also happy to announce that the satellite rights of the movie have almost been locked by a leading channel. The talks are also under way by a leading team of Bollywood for the Hindi rights.

Produced by Ravi Raja Pinisetty, the movie is inspired by a true incident in the lives of four friends. The thriller impressed the audience and is riding high at the ticket windows with positive reviews and word-of-mouth.