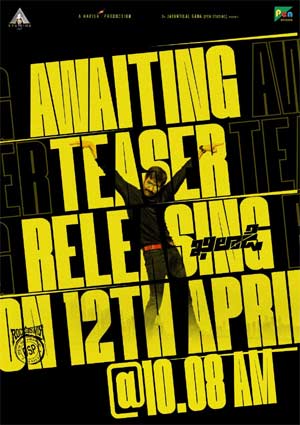 Star hero Ravi Teja’s high budget action entertainer, Khiladi, is being eagerly awaited by his fans. The Mass Maharaj will be seen in dual roles in the movie and this has further raised the expectations. And here’s the much-awaited update on Khiladi’s teaser.

The film’s teaser will be out on April 12th at 10:08 AM just a day ahead of the auspicious Ugadi festival. Ravi Teja looks stylish in his trademark pose in the teaser announcement poster. Teaser is expected to feature some action-packed visuals that were shot in the Italy schedule.

Young beauties Meenakshi Chaudhary and Dimple Hayathi are the female leads in this Ramesh Varma directorial. Khiladi is being produced by Satyanarayana Koneru in association with Bollywood production house Pen Studios and A Studios. Devi Sri Prasad is scoring the soundtrack for the movie, which is releasing on May 28.