Date and time locked for the title announcement of Bellamkonda Ganesh’s next
Published on Sep 8, 2022 3:00 pm IST 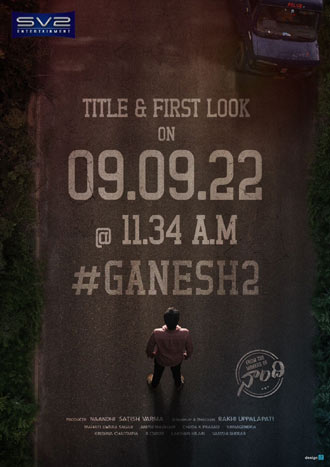 Bellamkonda Ganesh, son of producer Bellamkonda Suresh and brother of hero Bellamkonda Srinivas, is making his acting debut with Swathimuthyam. Having Varsha Bollamma as the lead actress, the movie is slated for a grand release on October 5, 2022.

Ahead of the release of his debut movie, Ganesh signs his next. Naandhi makers SV2 Entertainment is producing the film while Rakhi Uppalapati is directing it. The makers have released a pre-look to announce that the title and first look poster of the flick will be announced tomorrow at 11:34 AM.

The complete details about the movie might be known tomorrow. Mahati Swara Sagar to compose music for this film. Keep checking this space for more updates.