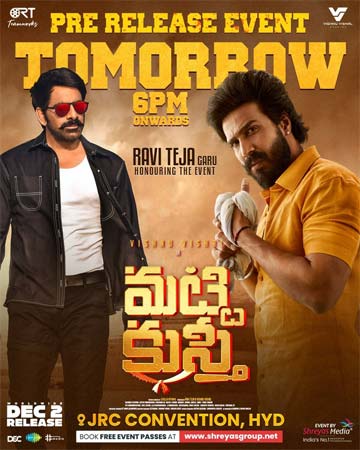 Vishnu Vishal’s next release is Matti Kusthi, directed by Chella Ayyavu. Mass Maharaja Ravi Teja is producing the movie with Vishnu Vishal under RT Teamworks and Vishnu Vishal Studioz banners. The film will be released as Gatta Kusthi in Tamil.

The latest news is that the film’s pre-release event will be conducted tomorrow at JRC Conventions, Hyderabad, from 06:00 PM onwards. The film’s trailer suggested that it would be high on entertainment and romance, generating more interest.

It is also stated that Ravi Teja will be attending this event to support Vishnu Vishal, with whom he shares a good companionship. Aishwarya Lekshmi plays the female lead, and Justin Prabhakaran composes the music. The movie is locked to hit the screens on December 2nd, along with HIT 2.