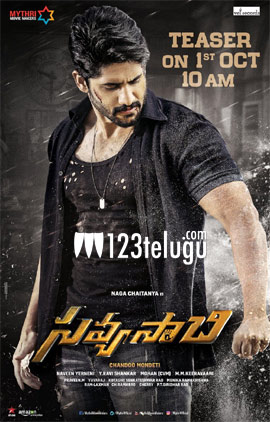 Naga Chaitanya’s upcoming film, Savyasachi, is gearing up for release in November, and currently, the team is focusing on wrapping up the post production to meet the deadline. Directed by Chandoo Mondeti, the film is being bankrolled by Mythri Movie Makers banner.

The film’s teaser is going to be launched on October 1, and all eyes are on Naga Chaitanya, who will be seen in an action packed avatar. The film also stars Madhavan in a key role, whereas Nidhhi Agrewal will be making her debut in Telugu with this film. MM Keeravaani is scoring the music.

Naga Chaitanya’s recent film, Sailaja Reddy Alludu took a huge opening in its first weekend, and buzz surrounding Savyasachi is expected to be even more in the next few weeks. Watch out this space for more details.