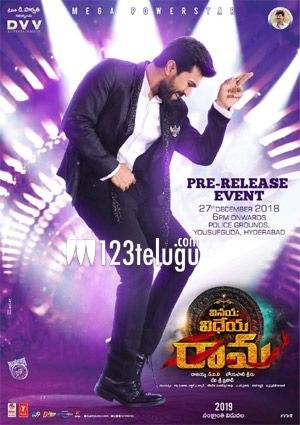 Mega Powerstar Ram Charan- Boyapati Sreenu’s upcoming action family entertainer, Vinaya Vidheya Rama, is gearing up for a January 11th release. The film has wrapped up its entire shoot except for a song. The post-production work is underway simultaneously.

Now, the latest update is that the makers have decided to hold the film’s pre-release event on the 27th of this month at the Yousufguda Police Grounds, Hyderabad. The film has Tamil hero Prashanth, Aryan Rajesh and Vivek Oberoi in crucial roles.