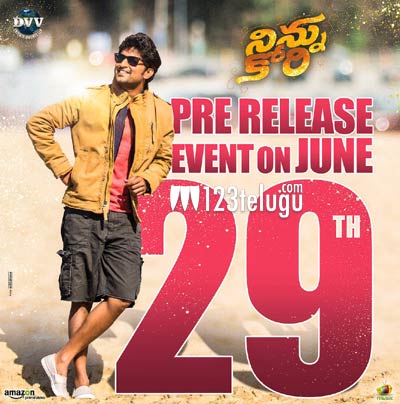 Natural Star Nani’s forthcoming flick, Ninnu Kori, is having a good buzz in the trade circles. The film’s theatrical trailer, which was out yesterday, is getting a superb response on the social media.

Meanwhile, the makers have decided to hold a grand pre-release event on June 29th and the details of the venue will be disclosed shortly. The film stars Nivetha Thomas and Aadhi Pinisetty in crucial roles.

Ninnu Kori is directed by debutant Shiva Nirvana and DVV Danayya has produced it. The film is slated to release on July 7. Malayali composer Gopi Sundar has scored the music for this romantic entertainer.