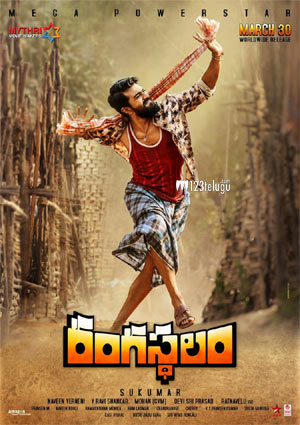 The much-awaited first look of Ram Charan-Sukumar’s period drama, Rangasthalam, was released this morning to a thumping response from all quarters. Ram Charan’s village youth’s avatar clad in a banian-lungi and a thick beard has wowed his fans.

The film’s makers have also announced that Rangasthalam will be released on March 30, putting an end to all the speculations about the film’s release date. Meanwhile, Rangasthalam’s entire talkie part has been wrapped up and the team will can the remaining songs in a few days.

Samantha is the female lead in this high budgeted romantic action drama. Jagapathi Babu, Aadhi Pinisetty and Anasuya play crucial roles in the movie. Sukumar is the director, while Mythri Movie Makers banner is bankrolling the movie. DSP has scored the film’s music.