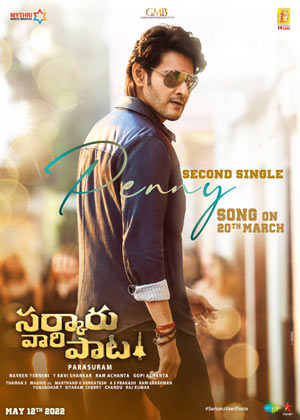 Superstar Mahesh Babu is coming to enthral his fans and audiences with his next, Sarkaru Vaari Paata. Confirmed to release on May 12, 2022, the movie has Keerthy Suresh as the love interest of the star hero.

Today, the makers have released a brand new poster to announce the second song titled Penny. It is also confirmed that the track will be out on March 20, 2022. However, the makers have mentioned no details about the singers of this song.

Vennela Kishore, Subbaraju and others are also a part of this movie. Produced by Mythri Movie Makers, GMB Entertainment and 14 Reels Plus on a grand scale, the movie has Thaman’s music and Madhi’s cinematography.