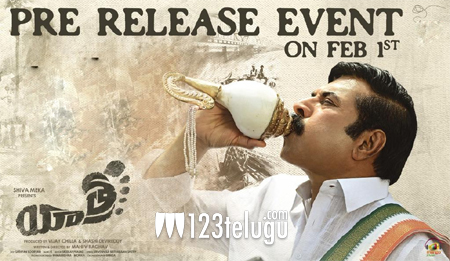 Yatra, the prestigious biopic on former Chief Minister of erstwhile Andhra Pradesh YS Rajasekhara Reddy, is slated for release on February 8. Malayalam stalwart Mammootty will be seen as YSR in the film. The recently released songs have been getting a good response from all quarters.

This morning, Yatra’s makers officially announced that the film’s pre-release event will be held on the February 1st evening at the N Convention in Hyderabad. YSR’s son and Leader of the Opposition in the AP Assembly, YS Jagan, is expected to grace Yatra’s pre-release event. However, there has been no official word on this buzz yet.