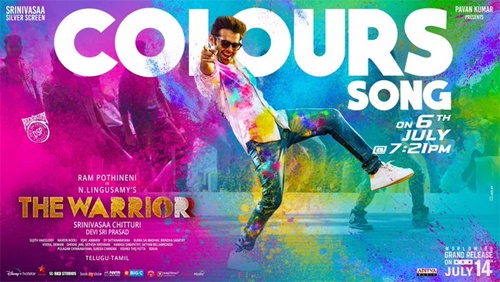 For the first time, the energetic actor Ram Pothineni will be seen as a police officer in his upcoming movie, The Warriorr. Helmed by Lingusamy, the Telugu-Tamil movie has Kriti Shetty and Akshara Gowda as the female leads.

The makers have officially announced that the 4th song from the movie will be released at 07:21 PM tomorrow. Touted to be a colourful song, it is composed by the Rock Star Devi Sri Prasad. The promotional content released to date has created a huge buzz around the action drama.

Produced by Srinivasaa Chitturi under Srinivasa Silver Screen, the movie has Aadhi Pinisetty as the antagonist. Nadhiya played a key role in this movie, which is confirmed to hit screens on July 14, 2022, worldwide.