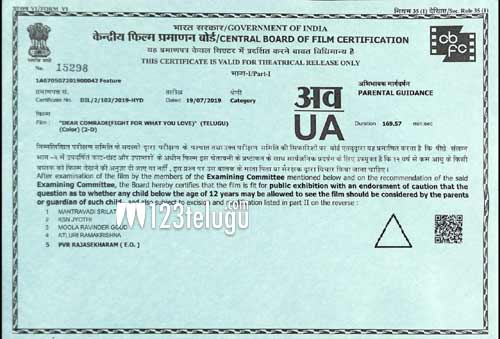 Vijay Deverakonda and Rashmika Mandanna’s upcoming romantic drama, Dear Comrade, has just finished its censor scrutiny. The CBFC has cleared the film with a UA certificate. With all the pre-release formalities getting completed, the film is gearing up to hit theaters worldwide on July 26.

Interestingly, Dear Comrade has a lengthy runtime of 2 hours and 49 minutes. The film showcases the male protagonist’s emotional journey of love, breakup and student politics. Vijay has been promoting the movie quite aggressively for the last few days and the music festival tour has created a decent buzz for the film.