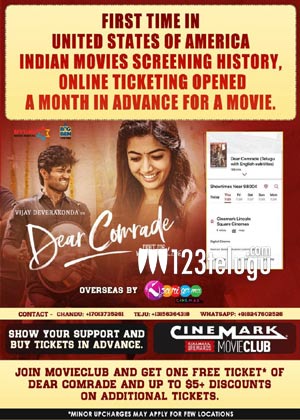 Vijay Deverakonda and Rashmika Mandanna’s upcoming romantic drama, Dear Comrade, is one of the most eagerly awaited movies of this season. The film is scheduled to hit screens on July 26th, exactly a month from today.

Meanwhile, Dear Comrade has set a new record for any Telugu movie in the US. The film’s overseas distributors have begun advance booking 30 days prior to the release, which is an unprecedented feat. This move will surely step up the craze surrounding the film. The advance booking has begun at the Cinemark Lincoln Square, Bellevue, WA, and more screens will follow.