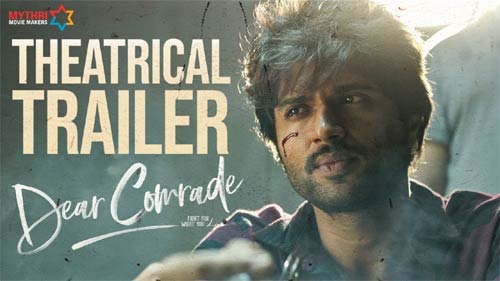 The much-awaited theatrical trailer for Vijay Deverakonda and Rashmika Mandanna’s upcoming romantic drama, Dear Comrade, is out just a while ago. The hard-hitting trailer showcases the intensity in the 3-year journey of a student rebel named Bobby, played by Vijay Deverakonda.

Dear Comrade’s trailer starts off in the snow-capped mountains in North India. Bobby’s redemption of his agitated past is then revealed through a series of intense and emotional glimpses. After Arjun Reddy, Vijay goes back to his angry young man avatar once again and steals the show in the college politics episodes. Rashmika too makes a striking impact as Lily, a state-level cricketer who is in an emotional relationship with Bobby.

First time director Bharat Kamma seems to have a promising film up his sleeve. Vijay-Rashmika’s chemistry and Justin Prabhakaran’s background score are the other main highlights of the trailer. Mythri Movie Makers and Big Ben Productions banners have jointly produced Dear Comrade. The film is slated to release on July 26.