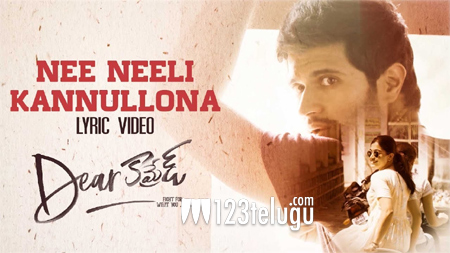 The much-awaited first single from Vijay Deverakonda and Rashmika Mandanna’s upcoming romantic drama, Dear Comrade, is out this morning. The song was released in all the four South Indian languages at the same time.

Titled Nee Neeli Kannullona, the song gives soothing and soulful vibes on the first listening. Gowtham Bharadwaj has sung this song, which describes the male protagonist’s love and longing for his girl. Rehman has penned some touching lyrics that are rich in Telugu flavor. Tamil composer Justin Prabhakaran scores well with his very first outing from the album.

Dear Comrade is being directed by debutant Bharat Kamma and produced under Big Ben Cinemas and Mythri Movie Makers banners. The film is slated for release on May 31.