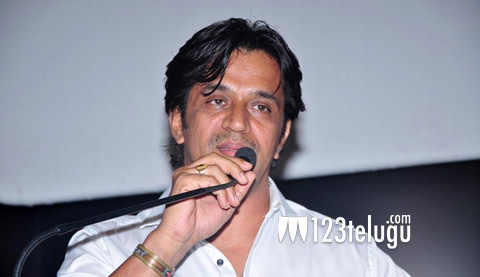 Action King Arjun, who is known for superhit films like ‘Gentleman’, ‘Oke Okkadu’, ‘Hanuman Junction’ etc, is going to being work on a new film titled ‘Jai Hind 2’. The movie’s inaugural press meet was held at the luxurious posh Park Hyatt hotel today. The event was attended by Jagapathi Babu, Dr. T Subbirami Reddy, Surveen Chavla and others.

The film is going to be a commercial entertainer based on the problems of the Indian education system. Arjun dedicated the film to former Indian President A.P.J. Abdul Kalam. “I dedicate this film to Dr. Kalam. I saw an article written by him and that inspired me to make this film”, he said.

Arjun is handling the direction and screenplay departments. He is the movie’s producer as well and he has also penned the film’s script.

Jagapathi Babu made some interesting comments at the event. “Real friends are quite rare these days. Friends come for a few pegs in the evening and forget everything the next day morning. Arjun is not like that. He neither drinks, nor does he forget his friends.”, he said.