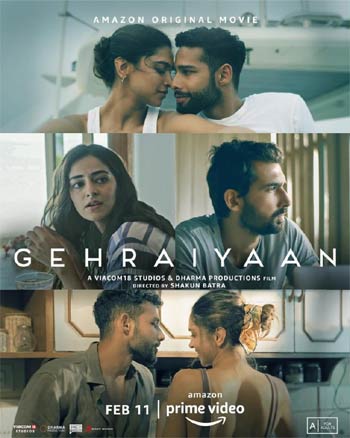 It has been quite some time since we have seen Deepika Padukone on screen. Now, she is back with her new film Gehrayiaan which is being directed by Shakun Batra.

The trailer is out now and it looks intriguing and different. Directed by the very talented Shakun Batra, Gehraiyaan is a relationship drama that deals with complex modern relationships, adulting, letting go, and taking control of ones’ life path.

Deepika Padukone looks different in a mature role and has also done a bold role. Siddhanth Chaturvedi is also playing a lead role in this film which will be out on Amazon Prime soon.

Speaking at the trailer launch, Deepika said Speaking about the film, Deepika Padukone said, “Alisha, my character in Gehraiyaan is extremely close to my heart and certainly one of the most challenging characters I have portrayed on-screen”.