Demand to announce Uyyalawada Narasimhareddy as a national hero
Published on Feb 23, 2018 9:10 am IST 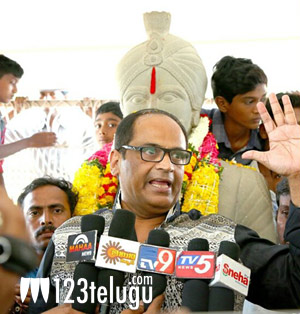 The valorous life of the first Telugu freedom fighter Uyyalawada Narasimhareddy is being made as a biopic with the title Sye Raa. Megastar Chiranjeevi is reprising Uyyalawada in the highly-anticipated biopic.

Jagadeeswarareddy also said that he has met with Andhra Pradesh CM Nara Chandrababu Naidu and requested him to install Uyyalawada’s statue in Amaravati. He further said that Uyyalawada was recognized as a great warrior by the museums in London and Chennai.