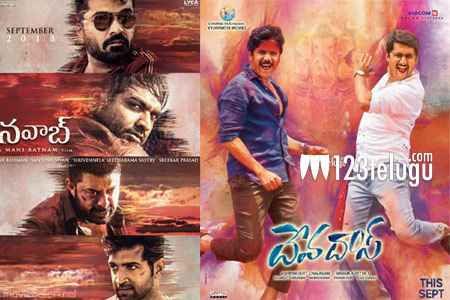 Two multi-starrers – Devadas and Nawab – released on Thursday and received a positive response from fans and critics respectively. While Devadas is racing ahead with decent collections at the box-offices in the twin Telugu states and overseas, Nawab’s Tamil version, Chekka Chivantha Vaanam, is performing exceptionally in the US. The film’s Telugu version has been registering poor collections despite having bankable stars.

In the US, Devadas and Chekka Chivantha Vaanam have surpassed the half-a-million-dollar mark on Saturday and are inching towards the $1 million milestone. On Saturday, until the latest updates, CCV collected a good $233,613 from 92 locations. CCV’s 3-day total including the premieres is $574,206.

Meanwhile, Devadas grossed $158,968 from 147 locations, taking its 3-day total to $545,191, including the Wednesday premieres. Sunday will be quite crucial for Devadas, as the film was sold at high rates to its overseas buyers. Stay tuned for more box-office updates on latest releases.