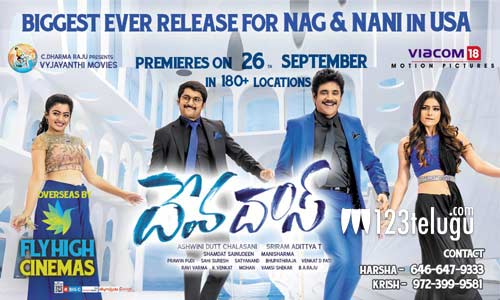 Nagarjuna and Nani have joined hands for the first time for a high budget multi-starrer, Devadas. The film is slated for release on September 27 and the pre-release buzz has been quite positive. Thanks to the craze surrounding the movie Devadas will be the biggest ever US release for both the star heroes.

Flyhigh Cinemas, the overseas distributors who are releasing Devadas across North America, are organizing the film’s premieres in over 180 locations on the 26th. Already, Flyhigh Cinemas has been carrying out a extensive promotional campaign for the last few days in several American cities.

Akanksha Singh and Rashmika Mandanna are the leading ladies in Devadas. Young filmmaker Sriram Adittya has directed the movie and senior producer Ashwini Dutt has bankrolled it. Mani Sharma is the film’s music composer.