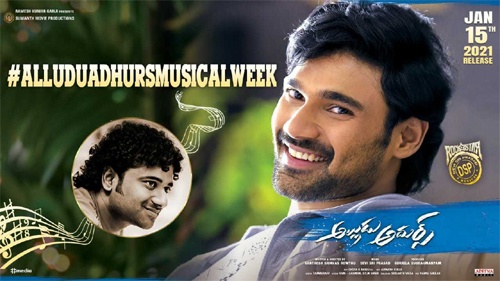 Young hero Bellamkonda Sai Srinivas and director Santhosh Srinivas’s wholesome entertainer Alludu Adhurs is done with its shooting and it is getting ready to grace the theatres for Sankranthi on January 14th.

Family entertainers are best pick for the audience during festive seasons and Alludu Adhurs is surely going to be one of the good choices for them for this Sankranthi.

Rockstar Devi Sri Prasad has scored five wonderful tunes for the film and Hola Chica was a big hit. Meanwhile, DSP plannes an ADHURS musical week. From today onwards, a song or song promo will be released this entire week to further hike expectations on the film. Today, second single Padipoya lyrical video will be unveiled at 5:04 PM.

Alludu Adhurs has many popular actors and technicians working for it. Nabha Natesh and Anu Emmanuel are the heroines opposite Bellamkonda Srinivas.