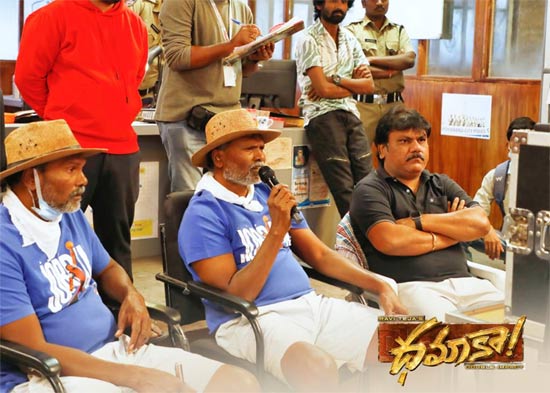 It is a known fact that Ravi Teja and Trinadha Rao Nakkina have collaborated for the first time for an out and out action entertainer Dhamaka. Dhamaka’s new action schedule began today in Hyderabad.

The team is canning a breath-taking action sequence in an enormous set on Ravi Teja and fighters. Ram-Lakshman masters are overseeing this episode.

The film is being mounted on a grand scale by the producer TG Vishwa Prasad while Vivek Kuchibhotla is the co-producer of the movie from the banners, People Media Factory & Abhishek Aggarwal Arts.

Sreeleela, who shot to fame with Pelli SandaD is playing the female lead opposite Ravi Teja in the film. Prasanna Kumar Bezawada has penned story, screenplay and dialogues for the film, while Bheems Ceciroleo is scoring the music.