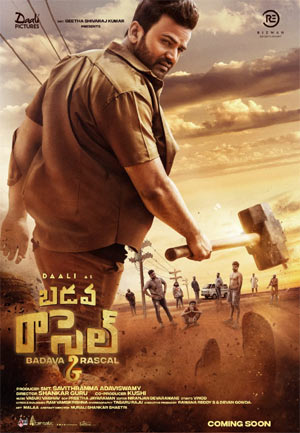 Kannada star hero Dhananjaya needs no special introduction to the Telugu audience. Though he made his debut in Telugu with the bilingual movie Bhairava Geetha, he became popular in Telugu with his powerful portrayal of Jaali Reddy in Allu Arjun’s blockbuster movie Pushpa.

While Pushpa was released on December 17th in all languages, Dhananjaya had another release after a week on December 24th. The film Badava Rascal directed by Guru Shankar ended up as a commercial hit, besides receiving enthusiastic reports from the critics.

Now, this film is being dubbed and released in Telugu. Daali pictures associated with Rizwan entertainment to execute Dhanunjaya’s, Known as Jaali Reddy for Telugu industry (Pushpa fame), “Badava Rascal” in Telugu market. Geetha Shivarajkumar presents it. The makers will announce the release date soon.