Dhanush Surprises Rajinikanth’s Fans With A Special Gift
Published on Dec 12, 2017 2:39 am IST 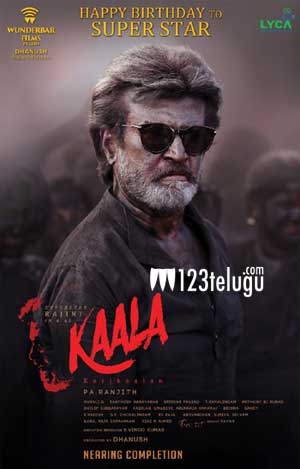 Dhanush has surprised fans of Superstar Rajinikanth on the eve of the latter’s birthday. At the stroke of midnight, Dhanush, who is producing Rajinikanth’s upcoming film Kaala under Wunderbar Films, unveiled a brand new poster of the film much to the delight of Rajini’s fans.

Directed by Pa Ranjit, Kaala is set in Mumbai and it stars Rajinikanth as a local don. Huma Quershi is the lead actress in this gangster film. For the past few weeks, fans of Rajinikanth were wondering if the film will be ready for release in January, 2018.

However, Dhanush has confirmed that the film is still under production and currently, it is in last stage of shooting. The film is expected to release soon after 2.0’s release in April, 2018. More details about the film are awaited.