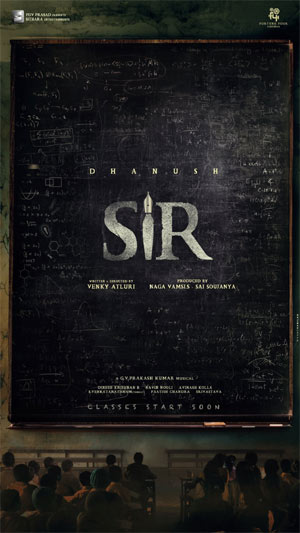 Dhanush, one of the finest actors in the South, signed a straight Telugu film with the young director Venky Atluri. Also filming in Tamil, the movie’s title has been announced today.

This first Telugu movie of Dhanush is titled, Sir. Meanwhile, the movie is titled, Vaathi in Tamil.

The first straight Telugu film of the actor will discuss the education system in our country. The title announcement video gives all the elevations to the character with wonderful BGM, given by GV Prakash Kumar.

Said to be an ambitious journey of a common man, the movie also has Sai Kumar and Tanikella Bharani in key roles. Malayalam actress, Samyuktha Menon is roped in to play the love interest of Dhanush.

Bankrolled by Sithara Entertainments in association with Fortune Four Cinemas, the movie will go on floors from January 2022.