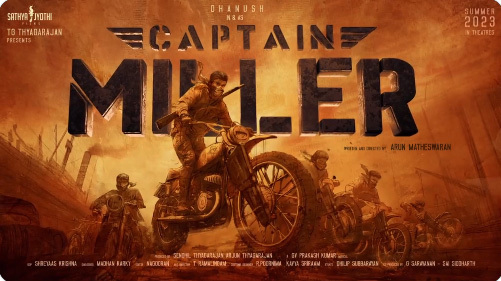 Dhanush is doing back-to-back films in his career. He will now be joining hands with director Arun Matheswaran for a period film set against the backdrops of the 1930s-40s.

‘Captain Miller’ is the title of the movie presented by T.G. Thyagarajan of Sathya Jyothi Films and produced by Sendhil Thyagarajan and Arjun Thyagarajan.

The film is co-produced by G. Saravanan and Sai Siddharth. This film is going to be the biggest budgeted film in Dhanush’s career.
.
Madhan Karky who worked for films like the Baahubali franchise, RRR, and Pushpa is penning dialogues for the Tamil version of the movie. GV Prakash will score the music.

Captain miller .. This is going to be so exciting. Super kicked to work with @ArunMatheswaran and my brother @gvprakash @SathyaJyothi pic.twitter.com/lS8OMSh4I9