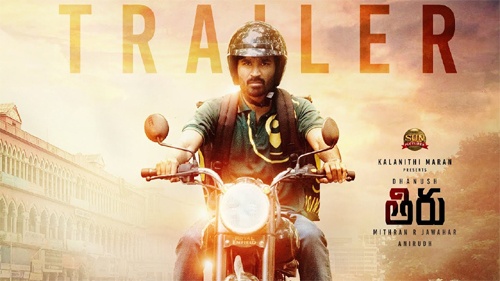 Dhanush has become a big sensation after his latest Hollywood outing The Gray Man. He is being praised by the English media as a tremendous performer. He will next be seen in the film Thiruchitrambalam which releases on 18th August.

Now the latest news is going to make the actor’s Telugu fans happy. The film will have a simultaneous Telugu release as well which is titled Thiru. The Telugu trailer was dropped by the production house Sun Pictures today.

It looks like the film revolves around the life of a pizza delivery boy Thiru who has a quirky grandfather and a serious Police father. Thiru looks for his love life and tries to understand its deep nature through his childhood friend Shobana played by Nitya Menen.

Raashi Khanna plays the love interest of Dhanush. Priya Bhavani Shankar, Prakash Raj, and Bharatiraja played crucial roles. It is directed by Mithran R. Jawahar and marks the fourth collaboration between the actor and director. Anirudh is the music director. Asian Multiplexes Pvt Ltd is releasing the film in Telugu.